GUA MUSANG, Malaysia — Norazila and Ayu were best friends and they shared everything that girls do: sleepovers, selfies, musings about cute boys.

But their friendship, which had blossomed in their placid hamlet in northern Malaysia, was destroyed late last month when Norazila, 14, discovered that Ayu, 11, had secretly become her father’s third wife.

“My best friend is my stepmother now,” said Norazila, whose family name is Che Abdul Karim, as she scrolled through her Facebook page filled with posts of the girls posing with adolescent pouts and fingers forming peace signs. “It doesn’t make any sense.”

Ayu’s marriage to Che Abdul Karim Che Abdul Hamid, a 41-year-old rubber trader with a prominent role at his mosque and a fleet of fancy cars, has reignited debate in Malaysia about the persistence of conservative Islamic traditions in this modern, multiethnic democracy.

In its election manifesto, the opposition coalition that won power in May promised to outlaw child marriage. 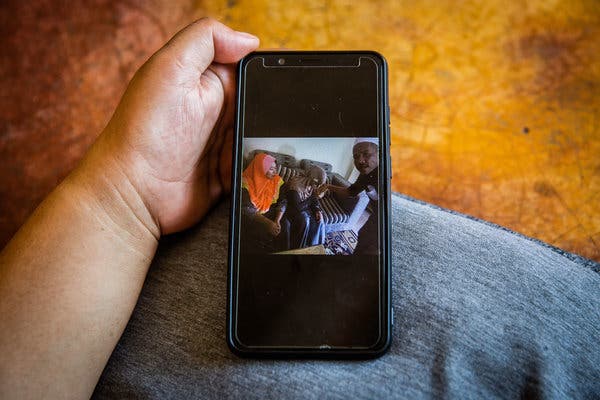 Nuraini Che Nawi, the first wife of Mr. Che Abdul Karim, showing a photograph of her husband’s marriage to Ayu, his third wife.CreditLauren DeCicca for The New York Times

“This is a practice from many centuries ago and at this stage in Malaysia’s growth and development, child marriage is not acceptable,” said Charles Santiago, a lawmaker with the governing coalition.

But ever since outrage over Ayu’s case erupted on social media in Malaysia — after Mr. Che Abdul Karim’s second wife posted pictures on Facebook of the marriage ceremony with a sarcastic “happy wedding” message to him — critics say the new government, under the guise of religious freedom, has done too little to protect minors.

Malaysia’s deputy prime minister, who also serves as minister of women, family and community development, called the marriage an “alleged incident.” The minister, Wan Azizah Wan Ismail, said last week: “It would be unjust to lynch someone on social media because of how we feel about the issue.”

Ms. Wan Azizah, who has previously expressed opposition to child marriage, declined to discuss Ayu’s case because it involved continuing investigations by several government agencies, including for the crime of sexual grooming.

Last year, Malaysia criminalized sexual grooming, in which an adult creates an emotional bond with a child for the purpose of sexual exploitation.

“The girl is a victim, no doubt about it,” said Latheefa Koya, a prominent human rights lawyer. “Why are we dillydallying in protecting a child? The lack of serious urgency about this case is disturbing,” she added. 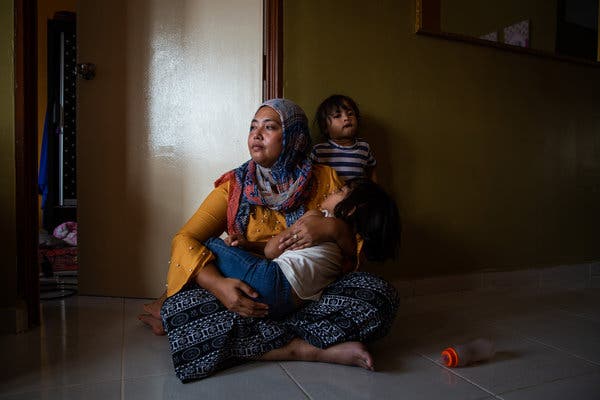 Siti Noor Azila, the second wife of Mr. Che Abdul Karim, with her two daughters in her family’s home in Gua Musang. She said she and her husband’s first wife had told him, “It is us or that girl.”CreditLauren DeCicca for The New York Times

“As a Muslim, I am offended by the idea that we should not protect a child because of an assumption that this has something to do with Islam,” Ms. Latheefa said.

Ayu was taken to a hospital for a virginity test this month, but later the same day was reunited with her husband and has been with him often since, family members said.

“I love her,” Mr. Che Abdul Karim said by phone, stressing he would not “touch” his new wife until she was 16 years old.

For her part, Ayu said in a text message that she loved her husband, who has six children with his two other wives. She used a heart emoticon to describe him.

Constitutionally, Malaysia’s legal system is bifurcated. Non-Muslim Malaysians, mostly from the nation’s ethnic Chinese and Indian minorities, are bound by civil law. Under the law, unless special consent is given by a high-ranking state minister, Malaysia’s non-Muslims cannot get married until they are 18.

The country’s ethnic Malay Muslim majority, however, must hew to Islamic law. A Shariah court must grant permission for minors below the age of 16 to marry. If a Muslim receives approval from Shariah authorities, there is no minimum age for marriage. 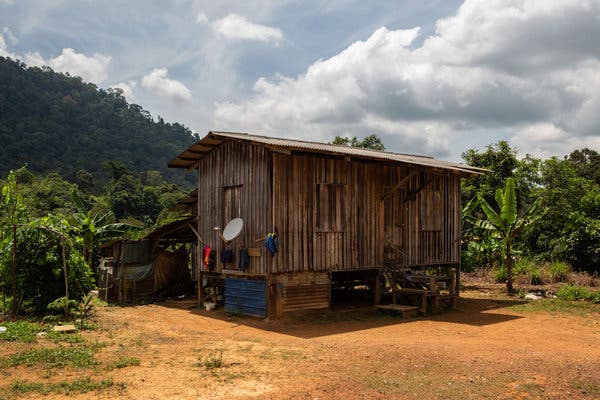 Ayu’s family’s home in Gua Musang. Child marriages in Malaysia are sometimes driven by the poverty of the bride’s family.CreditLauren DeCicca for The New York Times

“In Islamic procedure, as long as a bride agrees, her parents agree and the girl has had her menstrual period, then a marriage is O.K.,” said Sayed Noordin, the imam at the Kuala Betis mosque that Mr. Che Abdul Karim attends.

“Che Karim is a good Muslim,” Mr. Sayed added. “He always comes for prayer, and he is a responsible man.”

But Mr. Che Abdul Karim did get in minor trouble for not following all the requirements for a child marriage. The Shariah Court in Kelantan this month fined him $450 for the infraction of marrying Ayu in neighboring Thailand without the court’s prior permission.

Malaysian child rights activists said that about 15,000 girls under 15 were in child marriages in 2010. Globally, Unicef estimates that there are about 650 million girls and women of various faiths who were wed before they turned 18.

But an effort to outlaw underage unions for all Malaysians amid the toughening of child sex crime legislation failed in Parliament. Arguing against the ban, Shabudin Yahaya, a legislator from what was then the governing party, said that a girl as young as 9 could be ready for marriage if she had gone through puberty.

“Their body is already akin to them being 18 years old,” Mr. Shabudin, a former Shariah court judge, said in a parliamentary session. “So physically and spiritually, it is not a barrier for the girl to marry.” 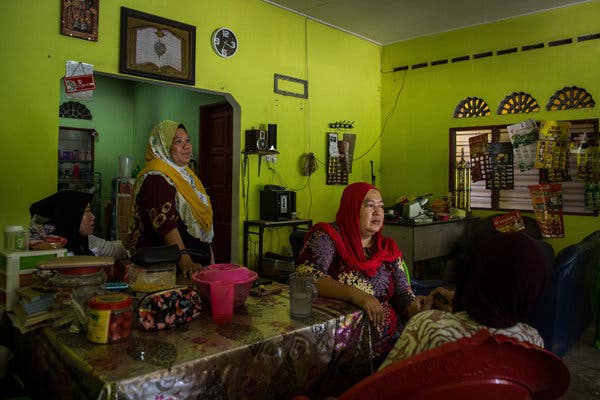 Ms. Nuraini, right, in her family’s restaurant, where Ayu’s mother worked. Ayu would often go there with her mother.CreditLauren DeCicca for The New York Times

Many child marriages in Malaysia are informal pairings that are not legally recognized by any court. But couples who do try to register their marriages find little resistance. A study by the Malaysia office of Unicef found that of 2,143 child marriage applications made to Shariah courts in seven Malaysian states from 2012 to 2016, 10 were refused.

In some instances, girls have ended up married to men charged with raping them. In 2015, a man from the eastern Malaysian state of Sarawak was charged with the statutory rape of a 14-year-old girl. But the case was dropped after he married her with permission from a Shariah court. Marital rape is not a crime in Malaysia.

Sometimes, Shariah courts accept underage unions to legitimize out-of-wedlock pregnancies, the Unicef report said. Other child marriages are driven by the poverty of the bride’s family.

In the case of Ayu, which is a shortened version of her full name to protect her identity, the income discrepancy was clear. Ayu is a Thai citizen whose father moved the family over the border to Gua Musang in Kelantan State to work as a rubber tapper. She grew up in a shabby, stilted wooden house with no running water.

One of her employees was Ayu’s mother, Aminah Hitam. Because Ayu did not go to school, she often accompanied her mother to work. 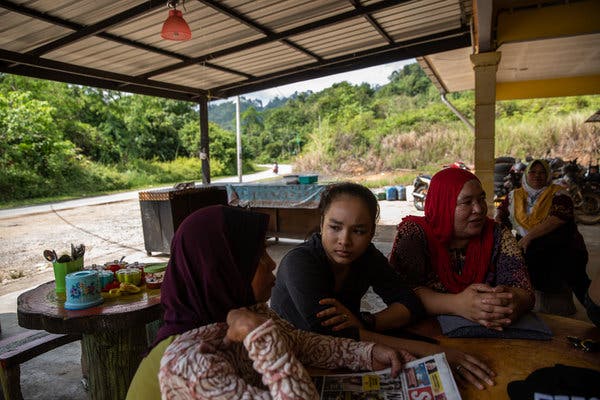 Ms. Nuraini and her daughter, Norazila, center, at the restaurant.CreditLauren DeCicca for The New York Times

Kelantan is one of Malaysia’s poorest and most conservative states. An Islamic political party has governed the state for decades, urging Muslim women to wear head scarves in public and ordering Arabic to be displayed on signs.

He said the existence of homosexuals and single parents in Malaysia “should be a concern for our government and society.”

Liberal Malays have questioned whether child marriage is truly an Islamic tradition or simply an outdated cultural practice. They have challenged the notion that the Prophet Muhammad married one of his wives when she was 6, saying that she was, in fact, much older.

“We cannot use a historical error about the Prophet Muhammad to condone child marriage,” said Ms. Latheefa, the human rights lawyer. “That’s sickening.”

Muslim-majority countries like Morocco and Egypt have outlawed child marriage, although underage unions remain common there. 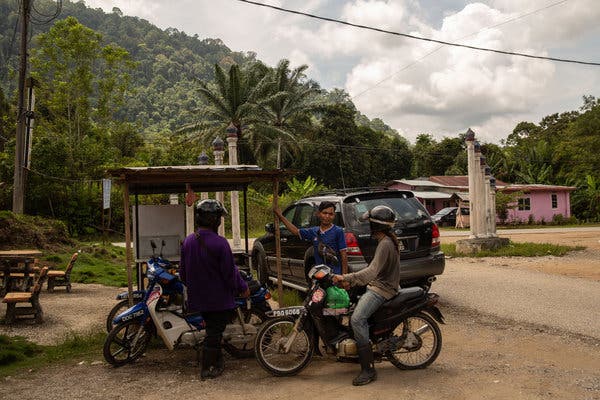 The entrance to Gua Musang. The town is in Kelantan, one of Malaysia’s poorest and most conservative states.CreditLauren DeCicca for The New York Times

This month, Malaysia’s Islamic affairs minister, Mujahid Yusof Rawa, said that his ministry had begun efforts to prohibit child marriage for Muslims, even as he cautioned that putting such a ban into effect would take time.

“We have said to him, it is us or that girl,” said Siti Noor Azila, Mr. Che Abdul Karim’s second wife. “We said, you choose. You cannot have all three of us.”

Ms. Siti Noor said her husband never gave her enough money to care for their four children, including one with spina bifida. She works as a baker to pay her bills.

“He is so stingy with us, but he has enough money to get married to Ayu and take her on holiday,” Ms. Siti Noor said, referring to a trip to a hill retreat that Mr. Che Abdul Karim posted about on social media. Ayu, she said, was the only one of the wives allowed to ride in their husband’s Mazda sports car.

As Ms. Siti Noor spoke, two toddlers screamed for space in her lap. She looked exhausted.

“Their father never takes care of them,” she said. “He doesn’t even like children.”

Ms. Siti Noor corrected herself. “Except one,” she said. “That Ayu.”